Hello there, I’m back!
Sorry I’ve been a MIA lately, but this past week has been one busy blur.
I’ve been out of town and on adventures, but now I’m back to fill you in on what’s been going on.

I went to my first Olympic Event, ever.
I joined the millions of other Brits a couple years ago in applying for the chaotic lottery that was the Olympic Ticket Sale.
To my excitement, I “won” tickets to the Equestrian Dressage.

After the interesting Opening Ceremony, London became buzzing with tourists and excitement. A few sweltering, overflowing tube rides weren’t enough to dampen my Olympic spirit and I couldn’t wait for my event.

My friend and I joined the crowds early morning at Greenwich, all being herded like cattle by cheery volunteers chirping “Good morning!” and “This way, this way!” in voices unsuited for the time of morning. It certainly pepped the crowd up and people waved their nation’s flags and chattered excitedly on our journey to the arena.

After being searched and x-rayed, we were in the park. We took photographs with the statues constructed completely of horseshoes and headed off in search of some overpriced water bottles. The water boys were incredibly sweet and snuck us some free Cadbury Chocolate Mascots.
Complimentary chocolate is the best chocolate.

We spent the morning cooing and chatting over the stunning horses and their routines. The audience was silent besides our whispers, all holding their breath until the exclamatory “Ah!” or “Ooh!” when the horse misstepped.

The other noise that could be heard was of course the music. I cannot comprehend the absolutely bizarre selections the rider’s made. 80’s pop keyboard soundtracks followed by a Hawaiian-esque luau song followed by elevator music. I must say, however, the Michael Jackson remix was incredible and the judges clearly enjoyed it judging by their scores. 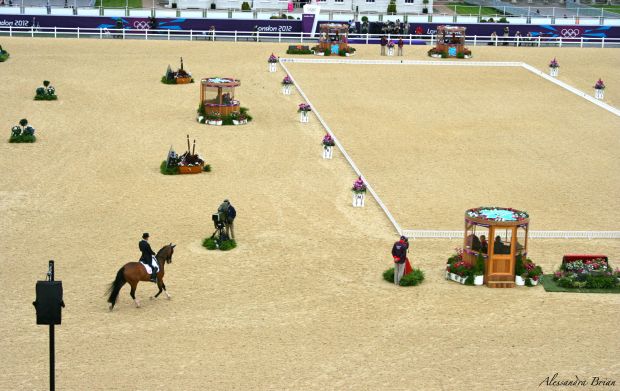 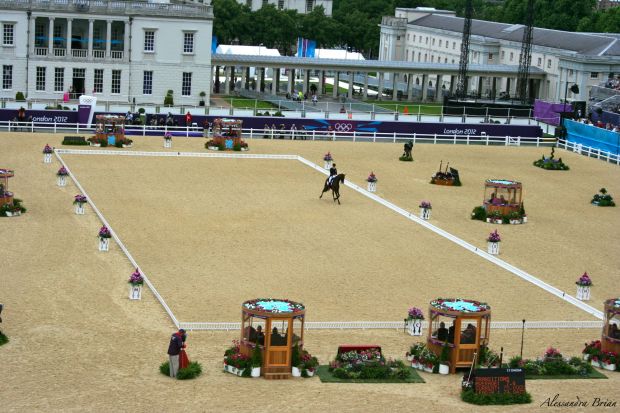 Like I said, the horses were all stunning. Perfectly groomed with gleaming coats and intricate braids in their manes. After seeing gorgeous, tall Thoroughbreds, Percherons, and Hanovers prance into the arena, it was quite funny seeing Spain’s Grandioso enter. A short, round Pura Raza Español danced in with his ears forward and tail swishing. Grandioso may have looked small and a bit overweight, but he still gave a great performance. 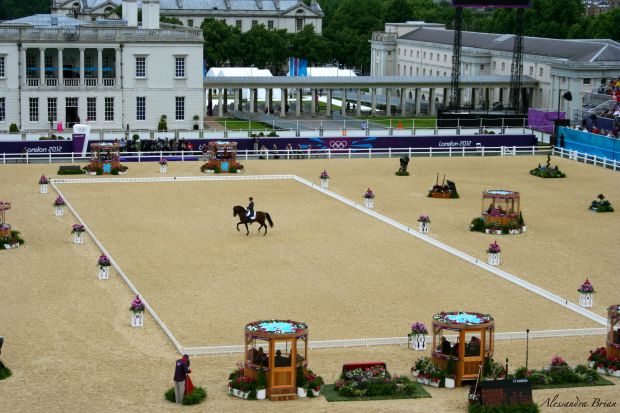 As the day had been so militantly organised, making it impossible to get lost or to wander from the designated areas, the food situation came as quite a shock. Outside the arena, on a grassy hill was long platform with different stands all in a line offering Fish & Chips, Classic Roast, Chinese Noodles, Spanish Paella, etc.

As the one hour break came, the stands emptied and hungry horse lovers headed to fill their stomachs and glasses in preparation for the rest of the riders’ performances. Instead of neat, organised lines sprouting from each entrance of the stands, the platform became one massive muddle of multiculturalism. Different languages were being shouted trying to find lost friends and small, heated debates began to break out over who was first in the nonexistent line.

My friend and I joined the Gourmet Pizza “line” behind the tallest man at the event. He was our marker. Having to stand our ground from all the different countries trying to shove in front for a relentless half hour made us feel as if we were battling for our meal. Luckily, the bubbling, gooey pizzas fresh out of the oven were well worth the wait, and the battle. 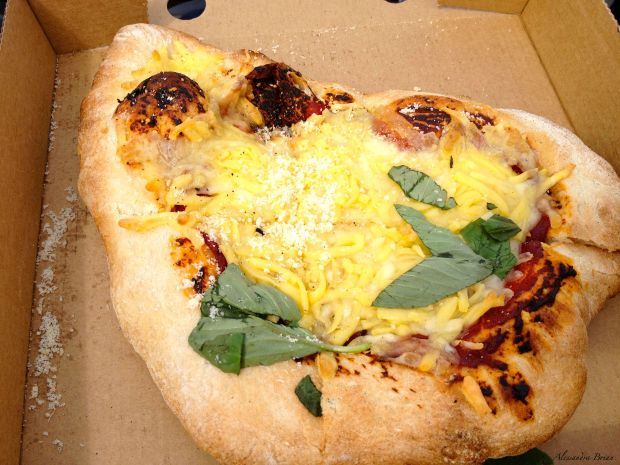 We returned to our seats with the spectacular view of Canary Wharf to eat our pizzas and enjoy the rest of the event. Although all the performances were beautiful, Team GB truly deserved the gold. It was such an incredible atmosphere made even more exciting with so many members cheering for the home team. 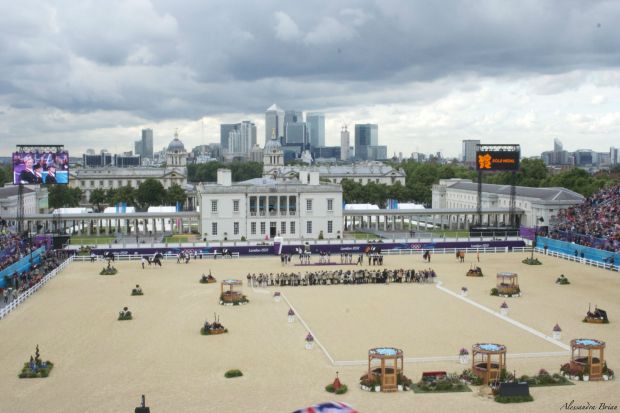 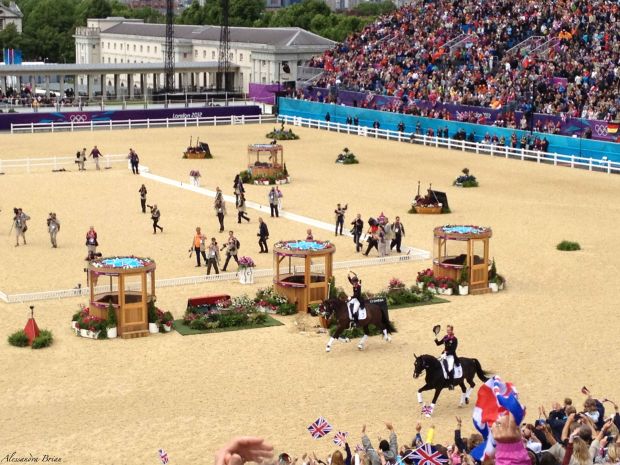 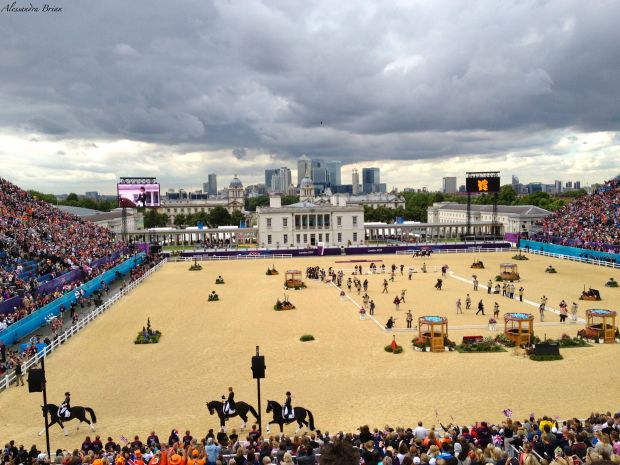 After leaving the event, we spotted mounted police overseeing the crowds. Desperate horse lovers flocked to their sides cooing and caressing their smooth necks.
This is Harvey and he could not have been more of a tart soaking up the love and attention. 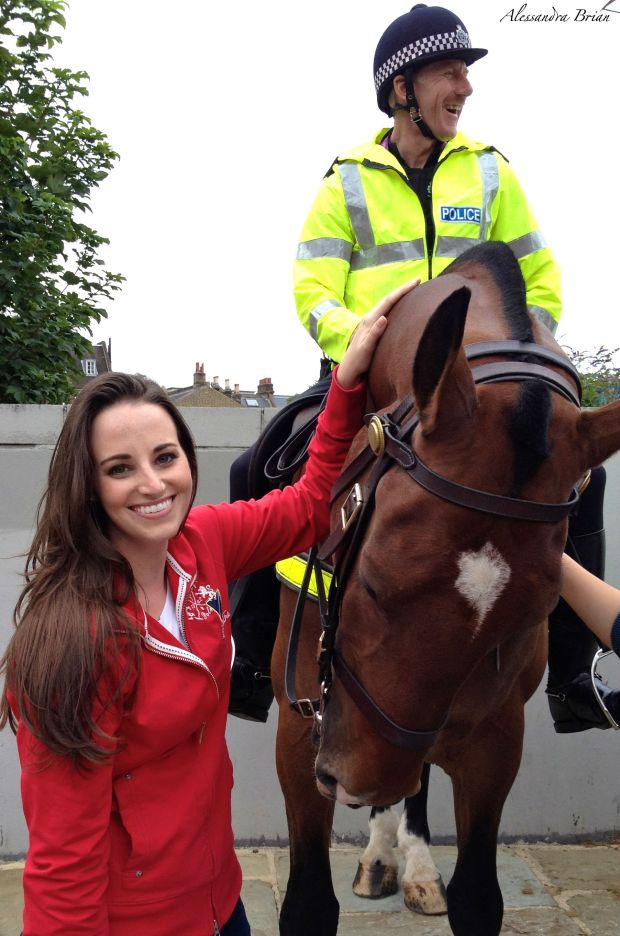 I have so enjoyed having the Olympics in London. Although I was a bit skeptical at first, everyday it has made me more and more proud of my city and of course, Team GB!