Oh, right. I’ve been informed this year’s food festivities are going by the name: Taste of London Winter.
Whatever its name, you know by now I love it. I love the mosh pit of foodies, friends, chefs, lovers, families and fiends, all scrambling to taste unlimited samples of food, snacks and an absurd amount of booze. 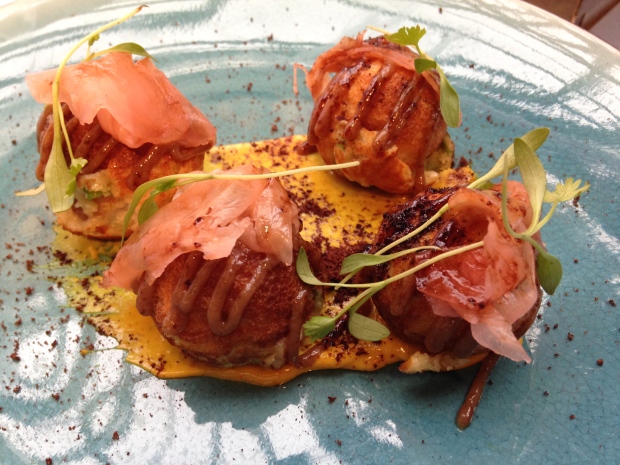 Pandan with white chocolate and coconut ganache was a mouthful of sweetness. 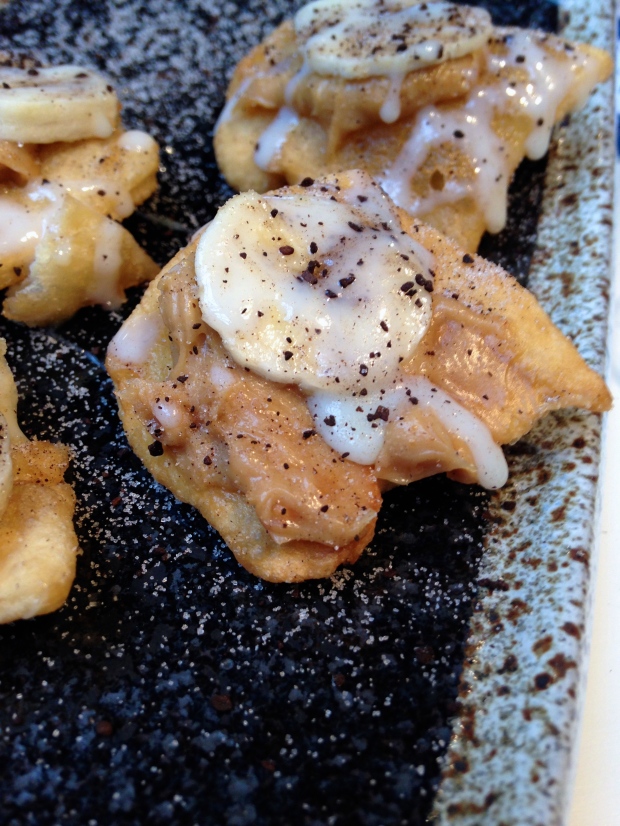 Finished off with fried roti with banana and peanut butter.

We were then to vote which dish was our favourite – which would you choose?
After voting for the smoked haddock takoyaki, we skipped off in search of more plates to taste. 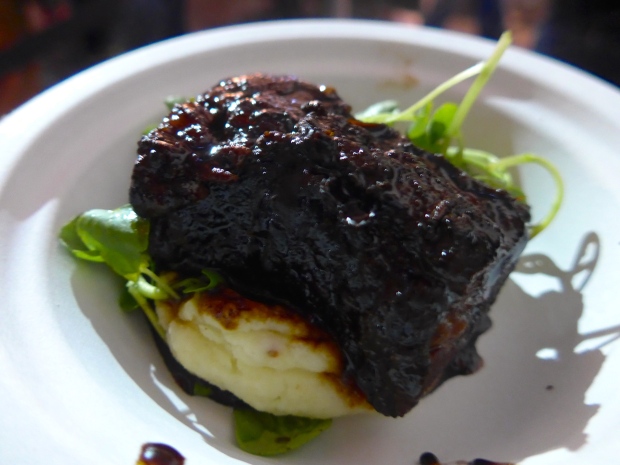 Barbecoa had a predictably long line. We joined the queue catching up on recent adventures before eventually getting our hands on sticky short rib with mashed potato. The meat was incredibly tender, but lacked that smoky sweetness needed for such a sticky bite.

We then submerged ourselves in the rows of food stalls, with people pedalling their samples like merchants in a souk. We came across Balsajo, offering up a board of smoked black garlic, which is visually rather shocking. But, this black beauty is something delicious. We happily popped this in our mouths like candy and surrendered to the unexpected sweetness that followed. 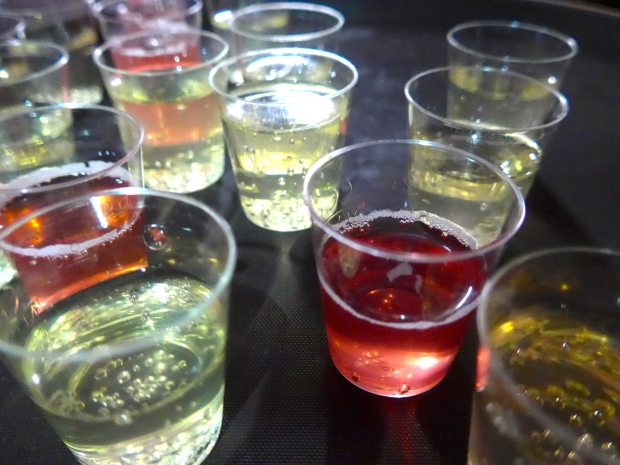 The lovely ladies of Azizi Drinks warmly welcomed us, insisting we try their concoctions. The fizzy drinks are created with hops to give the consumer that ahhh feeling of release after each sip. Yet, the delicious elderflower and rose flavoured drinks are actually nonalcoholic. The drinks were tasty and creators so sweet, I wish them the best of luck with their nonalcoholic endeavour.

The rain continued to pour down from the heavens, but this didn’t stop things from heating up at Tobacco Dock.

We found Kurobuta nestled in the corner, a badass Japanese joint which I told you about back when it was a King’s Road Pop Up. We plumped for the BBQ pork belly in a steamed bun, topped with pickled cucumber and spicy peanut sauce. I begrudgingly shared.

We passed this darling champagne van, sparkling in all its shining, bubbly glory. I sort of wanted to steal it and drive it round the dock, watching all the drunk people chase me with their half empty flutes.

We then found New York’s answer to the burger game. Shake Shack were offering their Lil’ ShackBurger, an Aberdeen angus beef cheeseburger topped with lettuce, tomato and ShackSauce. To my delight, given the closeness to Thanksgiving, they served up a deliciously spicy pumpkin pie flavoured custard.

This guy basically served up a platter of dreams to my American heart. Swoon.

Action Against Hunger is an awesome organisation working to fight world hunger. Each year, they team up with award winning Chefs to create Taste dishes. This year’s muse was hot dogs, of which we selected Jason Atherton’s creation. His choice of apple puree with onions, topped with crispy pancetta and grilled Gruyere, I’m sad to say, did not please. The combination was unnecessary and altogether, wrong. He’s still a personal food hero, but this is not something to be added to the menu.

Maida Vale sweetheart, The Truscott Arms had a truly wintery dish on offer. Their roasted cauliflower soup with textures of cauliflower, truffle oil and cauliflower crisp was really good. It was an airy, thick and rich creation with a creamy, truffley punch.

Tempted by anything pumpkin, I popped over to Andina for a bite of Peruvian picarones. Rings of pumpkin doughnuts served with purple maize honey.

Running out of time with quite a few Taste Crowns left, we followed the smoke back to Kurobuta for some tea smoked lamb with smoky nasu and spicy Korean miso. A delicious final bite of this year’s Taste.

With a bundle of brownies tucked under my arm for the car ride home, we dashed out into the rain full of food and Christmas spirit.

Did you attend Taste of London Winter this year? What was your favourite dish? Tweet me @Alessandra_LDN or leave me a comment. Don’t be shy.

Oh, and did you see my big debut? I’m trying not to let the fame get to my head. I always knew my shining moment would involve pumpkin doughnuts… What do you think of the video?