There’s nothing more exciting than room service.
Whoever invented room service should promptly receive a medal and deservedly, a massive hug.

Imagine them pitching the idea. You mean I can lounge in bed as you roll a cart of food into my room for me to consume in the comfort of my fluffy bath robe?
This is sort of what I imagine being Queen to be like.

As temporary King & Queen of The W Barcelona, we greedily gorged on eggs, tomatoes, toast, jams, fresh fruit and yogurts whilst taking in stunning views of the Mediterranean Sea. 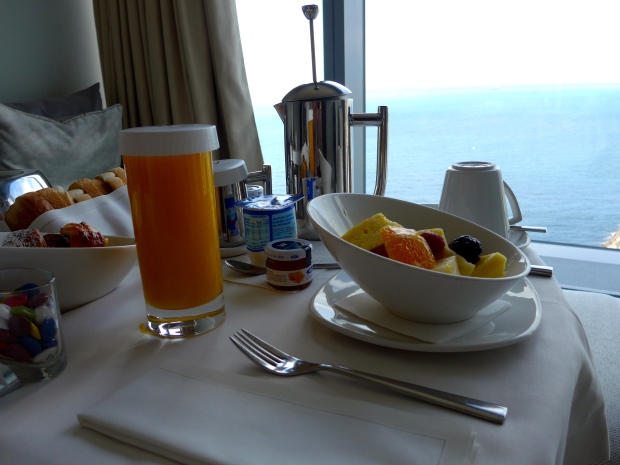 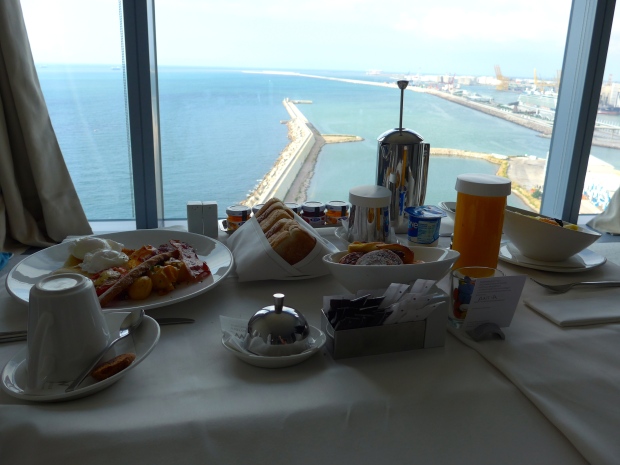 After an indulgent morning, we slipped on swimsuits and scurried down to the beach to get in a little last minute relaxation before spending the day tracking down Barcelona’s stunning architecture by the revered Antoni Gaudí. 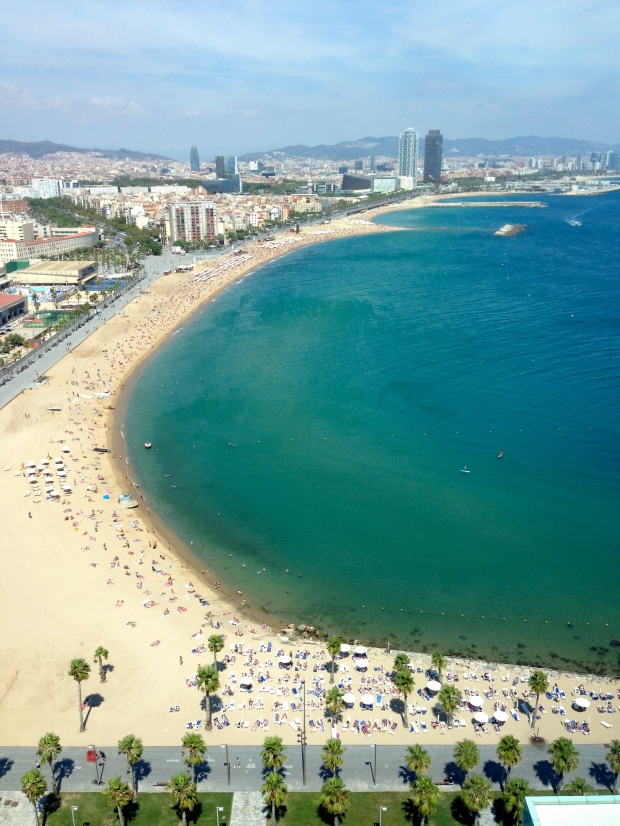 Over the past few days, we had seen people flying by on electric scooters, racing each other up and down the beach. As the day was incredibly hot, and we had quite a lot of ground to cover, we decided this would be the perfect way to get around. As we were traveling father afield than the beach, we were given electric bicycles. You still pedal, but the bike gives an automatic boost, taking away most of the effort. 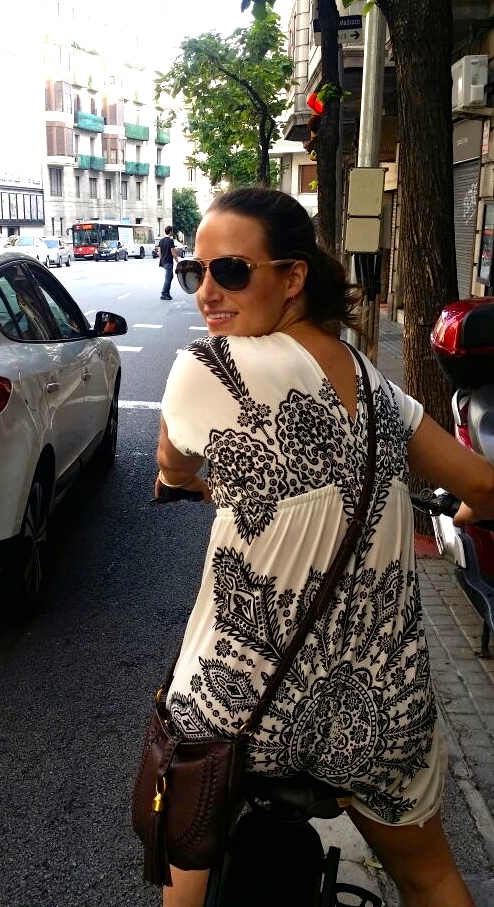 We set off on our new set of wheels, racing each other through herds of tourists and around leisurely couples on a stroll, getting used to our rides. We soon found that they were occasionally unpredictable, giving sudden bursts of energy, zooming us forward unsuspectingly. Mine happened to have to no bell, which resulted in me frantically calling out DING DING every once and awhile.

We rode up through busy streets, pedalling furiously up hills as cars and buses whooshed past. I was constantly distracted by beautiful buildings and interesting sites, making him increasingly nervous as I rode in and out of traffic. But, I was on a mission, leading us towards the towering spikes piercing the skyline in the distance.

We finally arrived at Sagrada Família, Gaudí’s magnum opus. Antoni Guadí was a Spanish Catalan architect whose works, littered mostly around Barcelona, attract admiration from all over the world. His creations were largely influenced by architecture, nature and religion. After being commissioned in 1882, Gaudí soon took over the construction of this church with engineering style and design unlike any church in the world. His plans were so vast and extensive, that by the time of his death, only a quarter of the project was completed. 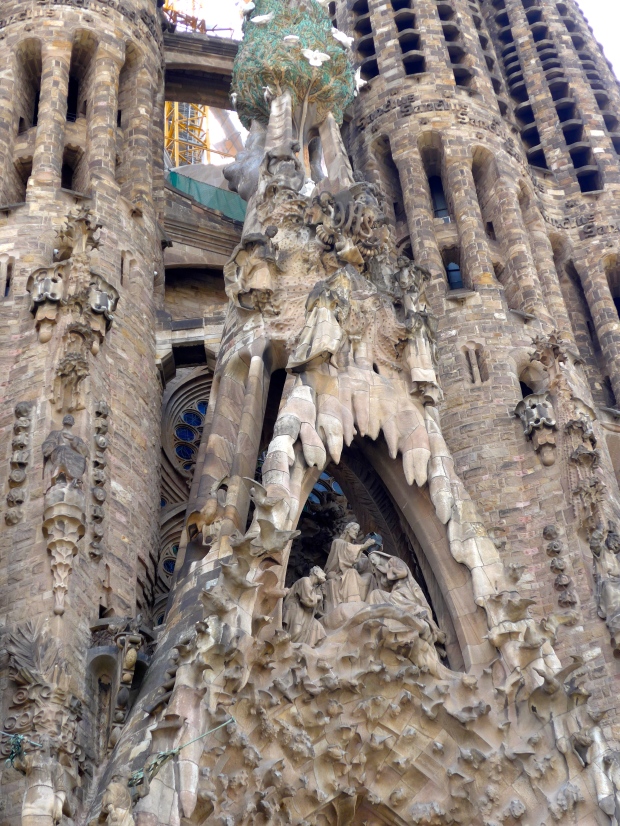 We sadly didn’t enter the building, but I obviously recommend a visit as it is truly unlike anything you’ll ever see.
We mounted our trusty bikes and continued uphill towards Park Güell. Huffing and puffing as we reached the top, having ridden for an hour in the blazing sun, we were more than ready for a rest.

Park Güell is a garden complex filled with architectural structures created and designed by Gaudí. There are unrestricted gardens with beautiful stone structures and stunning views, which anyone can access. But, the monumental zone with his mosaic and architectural creations is ticketed, only allowing a certain number of people per time slot. I was devastated to find that the time slot was full, so we were unable to reach the other buildings. But, the gardens and views themselves are absolutely stunning and we wandered round the peaceful pathways. 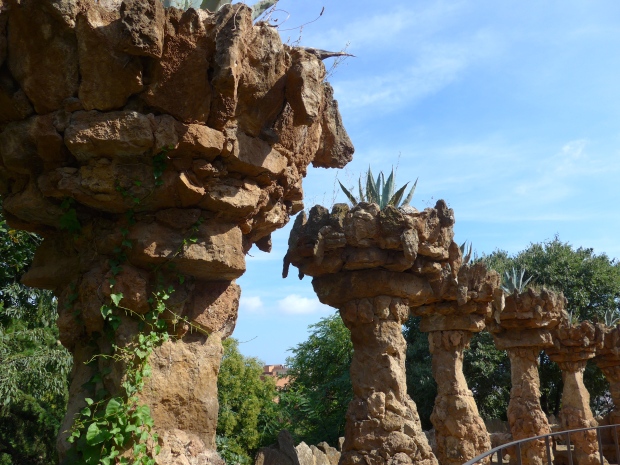 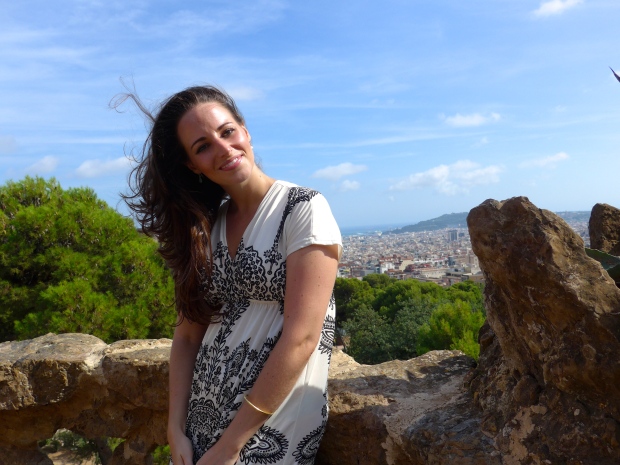 This pink coloured building was where Gaudí and his family lived for 20 years. It has now been turned into the Gaudí-House Museum which you can visit to see some of his original works. 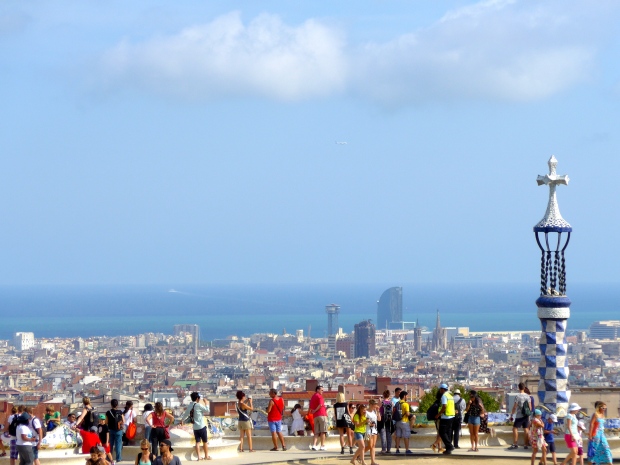 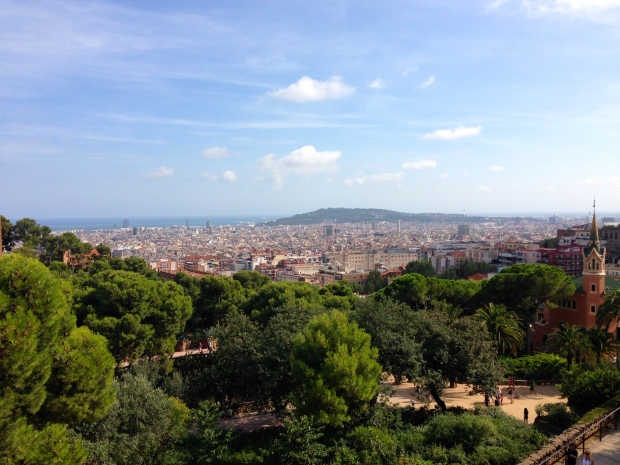 Having explored as much of the park as we could, we returned to our bikes for an enjoyable downhill journey. We raced through traffic until arriving at Casa Batlló. 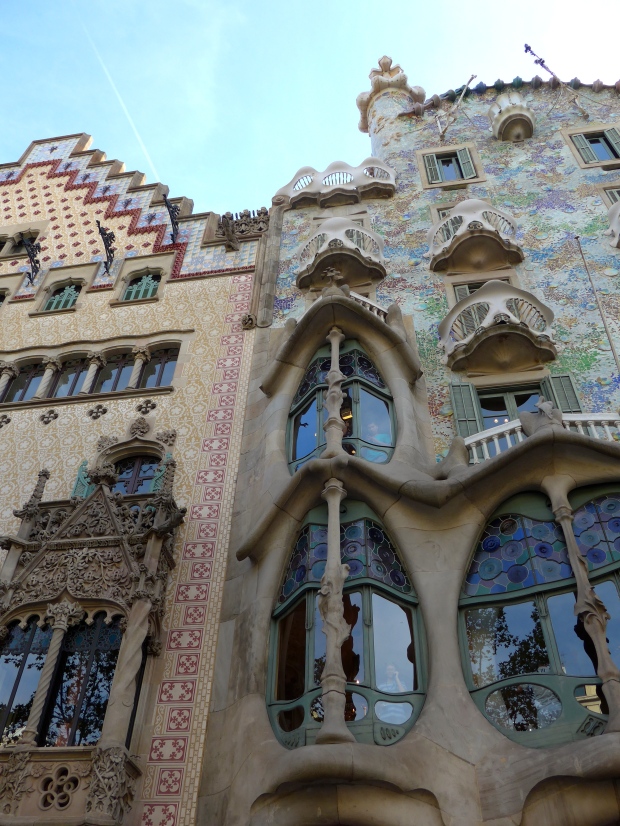 The building was bought in 1900 by Josep Batlló, a wealthy textile industrialist. The building itself was undesirable to buyers because of its design, but the family decided to purchase it for its centralised location. In 1904, the family wanted to find someone to redesign the house, making it unlike any other in its creativity and appearance. Seeing the innovation used in Parc Güell, they decided Antoni Gaudí would be the one for the job. 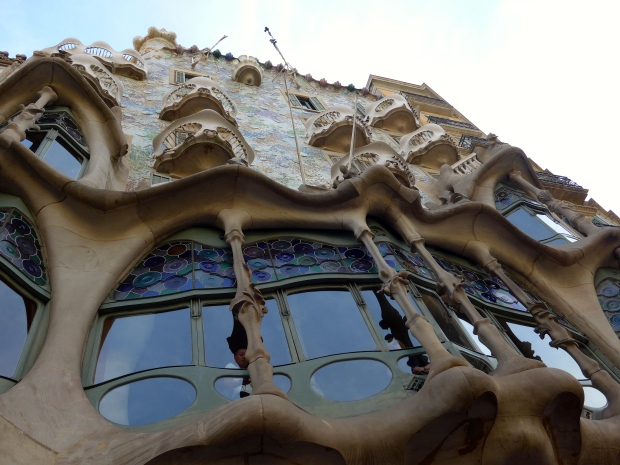 The building is absolutely stunning, with a skeletal appearance, but be sure to book tickets ahead as there was a two hour wait to enter.

Before leaving, we noticed the building next door, which is also beautifully designed. A door was open, so I snuck inside for a peak. 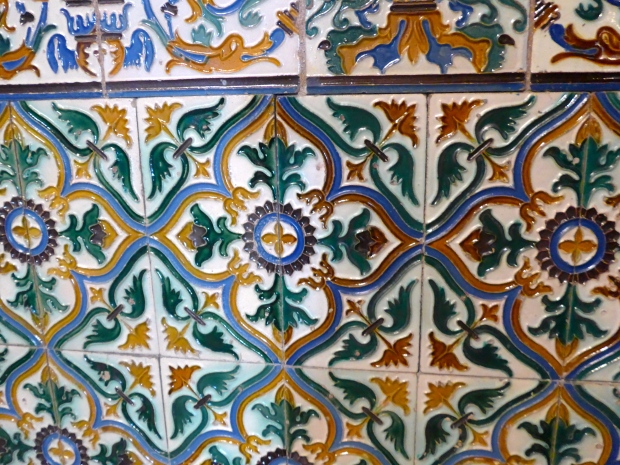 There were beautiful tiles, stain glass panels and the most amazing light fixtures.

We continued down La Rambla through swarms of tourists before make a quick stop at La Boqueria, my foodie heaven that I told you you about the other day. We sat in the shade and snacked on mushrooms and mussels escabeche. This traditional Spanish tapas is a thing of beauty. Perfectly cooked, canned mussels float around in a mixture of olive oil, vinegar, garlic, salt and pimentón. 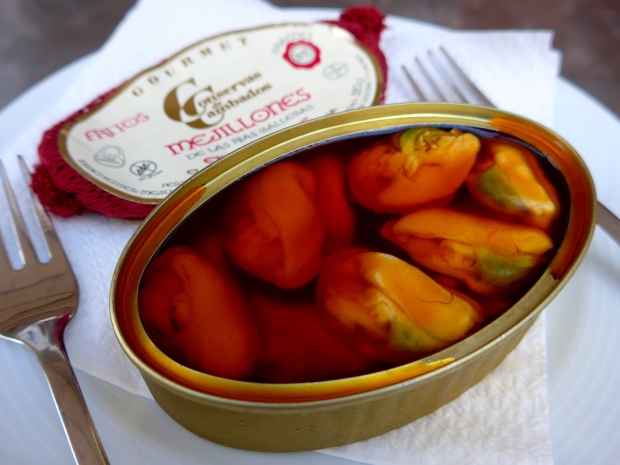 We then returned our electric rides and crawled back to the W, absolutely exhausted. After a little lounging by the window, watching illuminated boats sail by on the black water, we went for a stroll in the warm, night air. We went into a restaurant packed with locals for a late night meal. As you can see, there are no pictures of its interior, no descriptions of what we ate and certainly no food porn. The food was not good, to say the least. I picked at my plate and settled with the idea of having churros con chocolate for dinner, a Spanish treat that I had been desperate to find the entire trip. We left in search of my much lusted after treat, with no such luck.

Tired, but fulfilled from our day’s adventures, we returned to the big glass wave for some much deserved sleep.